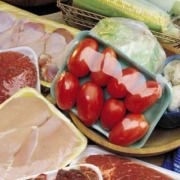 Fog can be seen in films used in the food packaging and agricultural industries. Fog usually apears in packaging of food items that are stored in cold and humid places. Water drops formed on the inside of packagings decrease the transparency of the film, and decrease the quality and freshness of the food inside.

In the agricultural industry, the fog formed on films decreases the amount of sunrays reaching the plants, and the water drops sometimes burn the plants due to their lens effect.

Anti-fog addetives, increase the level of film energy such that it balances with that of the water drops. Thus, the water on the inside of the films forms in shape of a thin layer rather than droplets. Furthermore, the anti-fog decreases the light reflection of the film, resulting in more clarity and transparency.

Using our top-of-the-line laboratories, Padena Polymer’s R&D team has produced a high-quality anti-fog masterbatch, which is competitive with its foreign counterparts.